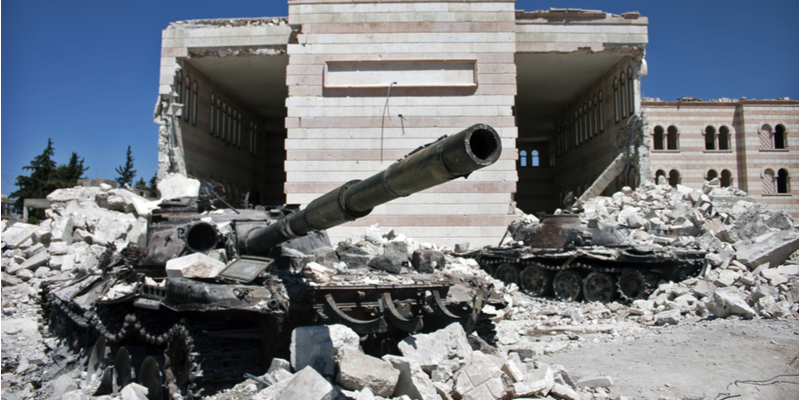 A conflict which seemed to be winding down may have instead entered another and more dangerous phase, after Israeli warplanes reportedly struck Syrian army positions near Damascus.

The attack targeted Syrian Defense Forces and some supporting Hezbollah fighters in the southern province of Daraa, which is near the Israeli-occupied Golan Heights. The Syrian news agency SANA reported that “the Zionist enemy carried out a strike…on some of our military positions south of Damascus and our air defences confronted them.” Several people, including Syrian fighters, Iranian paramilitary fighters, and at least one civilian, were killed.

Israel has launched dozens of attacks against Syria since the current Civil War began in 2011. But this attack, which combined jets and attack helicopters, was one of the most intense ones.

After years of fighting, Syrian Defense Forces and their Russian allies have pushed U.S.-backed rebels into a pocket in a remote corner of the country.

Other rebel groups still control most of the country east of the Euphrates River. And, following a recent invasion, Turkey took control of most of the northern portion of Syria. That occupation appears to be permanent, as the Turks are developing infrastructure in northern Syria. Against this backdrop, a major economic crisis threatens to throw the country into another tailspin.

In June 2020, the Syrian currency plummeted to 3,000 pounds to the dollar, and protesters took to the streets. As protests intensified, strongman Bashar al-Assad dismissed Prime Minister Imad Khamis. But the economic crisis deepened, mostly because harsh U.S. sanctions under the Caesar Act took effect at roughly the same time.

These sanctions are designed to fuel popular discontent and force Assad from office. They may well have that effect, as economic sanctions have triggered regime changes before. The problem is that no one is sure who, or what, would replace Assad if he goes.

A little over 100 years ago, at the Versailles conference following World War I. U.S. President Woodrow Wilson believed that if Kaiser Wilhelm abdicated in imperial Germany, democracy would take root in that country. It did, for a while. But then Adolf Hitler became chancellor in 1933. Roughly the same thing happened in Iraq about seventy-five years later. A U.S.-led invasion deposed Iraqi strongman Saddam Hussein, but a solid Iraqi democracy remains elusive.

The Role of Private Military Contractors

These matters are above contractors’ pay grades. If Assad falls, U.S.-backed rebels might have a chance to at least gain a share of power. If that happens, private military contractors will continue their three-pronged mission in Syria:

Contractors fulfil these same basic roles in other countries as well. U.S. law prohibits private military contractors from participating in offensive operations, which is why the Americans have never signed international conventions limiting mercenaries. These groups are illegal, and not just limited, in the United States.

Typically, contractors are a family’s primary or exclusive wage-earner. So, a job-related injury can have devastating financial consequences. The Defense Base Act’s wage replacement benefit significantly eases these financial pressures.

Most contractor injuries are temporary disabilities. After a long period of recovery and physical therapy, these individuals are able to return to work. While they are unable to work, the DBA pays two-thirds of the victim’s Average Weekly Wage. The AWW includes:

If the contractor is able to return to work on a limited basis during recovery, as is often the case, the DBA pays two-thirds of the difference between the old and new AWWs.

To establish a baseline, the AWW calculation usually considers the last 52 weeks of earnings. That calculation could be misleading. Many contractors were unemployed before they accepted overseas assignments. Additionally, there is a big difference in compensation between a security guard in South Dakota and a security guard in Syria, because there is a big difference in risk.

Many contractor injuries, such as brain and spine injuries, result in permanent disabilities. Alternative wage replacement is usually available in these instances, depending on the type and severity of impairment.

Bear in mind that “disability” is not just a medical term. This word also has vocational, educational, chronological, and other implications.