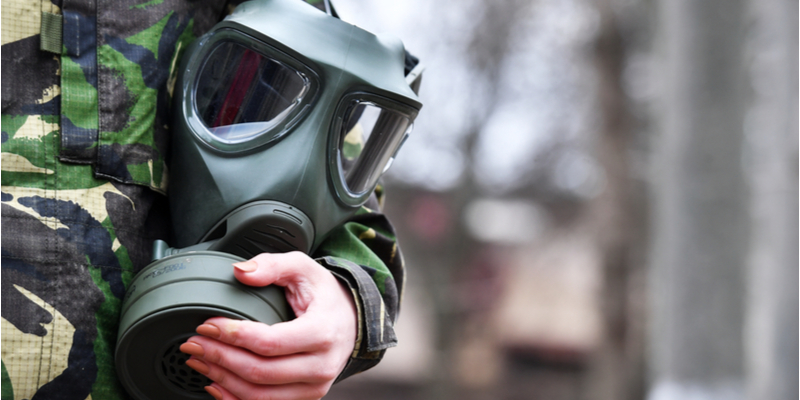 The shadowy Kremlin-linked mercenary group used chemical weapons against government fighters during an operation in southern Tripoli, according to multiple reports.

Russian President Vladimir Putin denied that the Russians in Libya have any official connection to the Kremlin. He also denied that Moscow uses mercenaries.

Until the twentieth century, illness and disease usually killed more soldiers than enemy action. So, it was only natural that chemical and biological weapons be part of a nation’s arsenal.

One of the earliest uses of such weapons in modern times may have been at the siege of Fort Pitt in 1763, during the French and Indian War, British commanders talked about giving Ottawa Indians blankets which were laced with smallpox. A smallpox outbreak did kill about 50 Indians. However, there is no “smoking gun” confirmation.

Chemical weapons are most closely associated with World War I. The French used chemical weapons in one of the first operations of the war. Soldiers used a few tear gas grenades against the Germans. The results were negligible. A few months later, the Germans used roughly the same weapons against the British. They achieved roughly the same results.

The Germans were the first World War I belligerent to use poison gas. In 1915, the Germans began stockpiling chlorine gas, which was a byproduct of some manufacturing processes. One officer called the gas “a horrible weapon.”

In April 1915, the Germans pumped about 168 tons of chlorine gas into Allied trenches. Terrified French Colonial troops broke and ran, but the Germans, who were probably as surprised as the Zouaves, did not rush into the gap. The Allies decried the attack as a violation of international law. The Germans countered that the relevant Hague treaty only banned chemical weapons shells. Gas projectors did not violate the rules of warfare. Later that year, the Germans used chlorine gas against the Russians in Poland.

The Allies quickly developed chlorine gas countermeasures, so the weapon lost most of its effectiveness almost overnight.

By the end of 1915, the Germans had switched to phosgene. This gas was harder to detect than chlorine and much deadlier. One of the first battlefield uses was against the British at Ypres in December 1915. Phosgene accounted for about 85% of the poison gas fatalities in the Great War.

In July 1917, once again at Ypres, the Germans first used mustard gas. This chemical was not nearly as deadly as phosgene or chlorine, but it was much more effective and much more debilitating. Mustard gas caused severe external and internal burning. Many of the victims who died lingered for five or six weeks.

After the Great War ended in 1918, belligerent powers continued to use poison gas, mostly in colonial wars. The Italians used mustard gas in Libya and Ethiopia in the 1930s.

An updated Geneva Protocol banned all use of chemical weapons, but said nothing about stockpiling them. During the Cold War, the United States and the Soviet Union had huge chemical weapons inventories as a deterrent.

Iraq used mustard gas in its war with Iran during the 1980s. That is the last confirmed use of battlefield chemical weapons.

Generally, mercenaries fight entirely for money. The Revolutionary War Hessians are a good example. These German fighters did not speak English and probably could not find places like New York or New Jersey on a map. If the Americans paid more, they would have switched sides.

Private contractors serve mostly for money. Contractors serving in Africa would not switch sides and fight for Boko Haram or ISIS if these groups offered more money.

Additionally, mercenaries only “fight” but contractors “serve.” Generally, mercenaries are on battlefield front lines, or they are nowhere. Contractors, on the other hand, mostly serve in noncombat positions. These individuals are cooks, mechanics, translators, and construction workers as well as soldiers.

There is another difference between mercenaries and contractors. When they are injured, mercenaries are usually on their own. But when private contractors get injured or sick during their deployments, they can rely on the Defense Base Act.

Wage replacement is one of the most important DBA benefits. Generally, victims are in one of four categories:

Sometimes, these categories overlap. Frequently, victims start in the TTD category. Then, as physical therapy progresses, they move to the TPD category.